Posted on May 23, 2011 by drsamtocco in adjustments, chiropractic, Clawson, Health and Wellness, Michigan, Skin 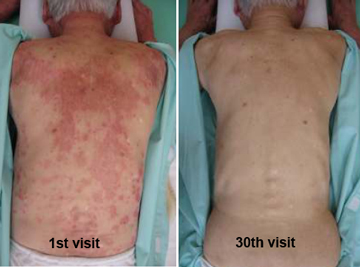 Resolution of Psoriasis with Chiropractic: A Case Report In the May 4, 2011, issue of the research journal, the Annals of Vertebral Subluxation Research, is a case study documenting chiropractic helping a patient suffering from severe psoriasis. The study notes that patients with psoriasis develop patches of skin with dry, white-silvery, dandruff-like scales.
In this case study, an 85-year-old man presented himself to a chiropractor. He was exhibiting skin irritations over his entire body and was suffering from extreme skin itchiness, soreness, and heat sensation.  Within one month of onset, the skin problem spread over his entire body and caused the elderly man to become physically and psychologically uncomfortable due to lack of sleep and stress.
Chiropractic care was initiated after medication prescribed by the man’s medical doctors worsened his condition. The study results reported that dramatic improvement was observed after just one visit. After the 3rd visit, the swelling of the lower extremities and the abdominal bloating had decreased.
It was reported that even though the patient was receiving care during an unusually hot summer, the primary symptoms of skin itchiness, soreness, and heat sensation had improved. The authors of the study noted that during the initial portion of care, the elderly man felt more itchiness on some days than others. By about the 10th visit, some itchiness was still felt while the man was sleeping, and from the pressure of his underwear, etc., but it gradually subsided.
The patient received 30 visits over a four month period. His condition was rated from 0 to 10 each visit with 10 being the worst and 0 being totally resolved. The study noted that from the 11th visit through the 30th visit, the patient was rated as a 0 for his psoriasis problem.
——————————————————————————–
Why did this work and creams and pills did not?

The body heals from above-down, inside-out. You get a paper cut and the body takes care of it, right?  This only can happen through the nervous system!

Chiropractic care is not going to simply “pop” bones in and out.  It doesn’t work that way.  It works much like braces on your teeth.  It takes many “adjustments” to get those teeth to move – it takes time to change their position.  Another analogy is a tree or plant…if you simply try to pop a branch the other direction, you may damage it, but gradually if you change it’s postion to lean to toward the light, the plant will slowly respond and move that direction.  Lastly, when a spine has misaligned for a long time, it may take a long time to correct it.  This man is 85 years old, and his spine has probably been troubled for many years, since childhood, perhaps.  It’s never too late to treat your body right; many times, older people are surprised to see how forgiving their body’s really are.

Chiropractic has been effective for people with all kinds of skin problems, psoriasis, eczema, etc, however, we do not diagnose these problems, simply look to the nervous system for interference, and let the body’s innate do the healing.

There is a new doctor in town: Dr. Innate Intelligence….